St. John the Forerunner and Baptist 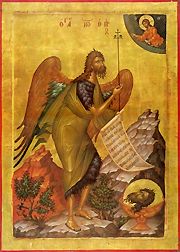 The saints of the church, who are alive in Christ, are not only models whose lives and devotion to God we should strive to emulate, but also are intercessors to God. Individual faithful and parish communities are called upon to take a patron saint, in the tradition of the Holy Orthodox Church. Early churches were built at the site of the graves of many of the Holy Martyrs. These communities were dedicated with the name of the martyr, and he or she was called upon by the community who worshiped there to act as an intercessor and protector for the faithful. Churches today place relics of the saints inside the Altar table as well as in places for veneration in the church in remembrance of these holy men and women in our lives.

In those days came John the Baptist, preaching in the wilderness of Judea, “Repent, for the kingdom of heaven is at hand.” For this is he who was spoken of by the prophet Isaiah when he said,

“The voice of one crying in the wilderness:
Prepare the way of the Lord,
make his paths straight.”

Now John wore a garment of camel’s hair, and a leather girdle around his waist; and his food was locusts and wild honey. Then went out to him Jerusalem and all Judea and all the region about the Jordan, and they were baptized by him in the river Jordan, confessing their sins.

Apolytikion of Synaxis of John the Forerunner

The memory of the just is celebrated with hymns of praise, but the Lord's testimony is sufficient for thee, O Forerunner; for thou hast proved to be truly even more venerable than the Prophets, since thou was granted to baptize in the running waters Him Whom they proclaimed. Wherefore, having contested for the truth, thou didst rejoice to announce the good tidings even to those in Hades: that God hath appeared in the flesh, taking away the sin of the world and granting us great mercy.

Kontakion of Synaxis of John the Forerunner

Plagal of the Second Tone

The Jordan accepted Your presence in the flesh and reversed its course in fear. John, fulfilling the spiritual ministry, fell back in awe. The ranks of Angels, seeing You in the flesh, baptized in the river, were amazed, and all who were in darkness were filled with light, praising You who appeared and enlightened all.