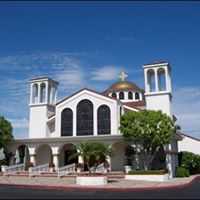 The story of the first Greek Orthodox Community in Orange County began in 1960, when a group of Greek Orthodox Christians in Orange County desired to worship together and began to seek the necessary components: a priest and a place to meet. It was known as the Greek Orthodox Church of Orange County and was incorporated on October 20, 1961, with the State of California. In 1963 it was chartered as a parish of the Greek Archdiocese. Our first Divine Liturgy was celebrated on Sunday, October 22, 1961, at the Seventh Day Adventist Church located on 12706 Ninth Street, in Garden Grove. On October 12, 1965, the community purchased the first parcel of land, 1.66 acres at 405 N. Dale St.

An additional acre was purchased in the Fall of 1967 bringing our total property to 2.66 acres. The first Divine Liturgy was celebrated on the property in September 1967, and the community selected St. John the Baptist as our patron saint.

A group of parishioners with some knowledge of construction and a great amount of love and enthusiasm set about to build their first church building - a small wooden structure. Over a period of weekends, this building was completed and on November 5, 1967, we celebrated the first Divine Liturgy in the little sanctuary.

In August 1969, Father George Massouras arrived to become the new priest of our community. He was to lead the parish through the next ten years of its growth and accomplishments. Plans commenced for the construction of the Education Center and on November 30, 1969, ground was broken. The dedication of the Cultural/Educational Center was held on September 13, 1970, with Bishop Meletios officiating along with Father George Massouras. In July, 1974, the community took leave of the "past" when the little church, which had symbolized its united efforts and dedication, was removed from the premises. Church services were held in the unfinished Educational Center for the next few months. When construction restarted on the Educational Center, the Community purchased a 40 x 60-foot tent, which was erected on the parking lot on October 2nd, 1974. In June, 1975, the tent was dismantled and another phase came to a close. We moved into our new church even though it was not furnished and scaffolding was still in place and in use. On November 16, 1975, the "Opening of the Doors" service was celebrated with Bishop Meletios officiating assisted by Father George Massouras and Father George Hadjis. In the summer of 1979, Father George Massouras was assigned to a parish in Chicago and Bishop Anthony introduced us to our new priest, Father James S. Diavatis, who came after a pastorate of eighteen years in his first parish in Waterbury, Connecticut.

On June 9, 1985, the church of St. John the Baptist was consecrated to God. Officiating at this historical service were Archbishop lakovos, Metropolitan Kyrillos of Crete, Bishop Anthony, Father James Diavatis, and many other Orthodox clergy.

On January 1, 2011, our community received our current Proistamenos, the Reverend Father John Kariotakis. Father John’s arrival was much anticipated as a new opportunity for our parish to continue to grow in Christ. Our community, over the past 9 years, continues to grow. Our parish has many active
ministries, which we hope you will explore on our website. As we move forward into the future, we are focused on strategic long term planning to assure that the St John the Baptist Community will continue to be the center of our spiritual being and cultural life for many generations to come.